Hobby beekeeping has grown massively in recent years, especially across North America and Europe. Proponents of beekeeping encourage new keepers to get started by explaining some of the benefits experienced by the bees themselves. But just how does beekeeping help bees?

Beekeeping is very similar to animal husbandry in that the bees are managed animals. The bees themselves benefit from:

In fairness, poor beekeeping practices can harm multiple bee species. It is therefore important to learn how to do things correctly.

If you are new to beekeeping or thinking about getting started, read on to learn more about how beekeeping helps bees. You will learn about better health for your bees, protecting them from predators, managing their populations, and more. Scientific research suggests that honeybees may have originated in South and Southeast Asia. All but one species is native to the region. The honeybees we are familiar with in North America and Europe come predominantly from the UK.

Bees spreading across the planet through human trade were soon subject to a variety of parasites and predators that threatened their populations. Not much has changed over the years. Today, one of the honeybee’s biggest enemies is the varroa mite. Also known as the varroa destructor, this prolific mite feeds on honeybees with a voracious appetite.

If the mites weren’t bad enough, bees are also subject to pesticides and diseases related to poor nutrition. All of these things combined jeopardize honeybee colonies if left unchecked. That is where beekeepers come in.

One of the beekeeper’s jobs is to continually check hives to make sure parasites aren’t around. Assuming the keeper finds varroa mites and other parasites in the early stages, the damage can be mitigated. Do not underestimate the value of early detection.

Diseases related to poor nutrition are not uncommon in areas where there aren’t enough flowers and plants to keep all pollinators satisfied. Again, beekeepers play a vital role here by making sure their bees are properly fed. I’ll discuss that in a bit more detail later on.

To close out this section, consider the pesticides we humans use to control insects. Where nature has built in a way of controlling pests naturally, we attempt to manipulate things by introducing chemicals. Pesticides do indeed control pests. However, honeybees are not pests.

Beekeeping reduces the risk of bees being exposed to pesticides by managing where they live and feed. Managed bees are less likely to be bothered by humans who are unnecessarily afraid of them, further limiting their exposure to pesticides.

Safety During the Winter

Honeybees naturally begin limiting their outdoor activity once temperatures start to drop. This is when experienced beekeepers begin making plans for overwintering. Indeed, the winter months are the most critical for managing bee health.

Beekeepers help bees in this regard by making sure their hives are well-stocked with honey before winter hits. The most observant keepers check hives multiple times to ensure there is enough food. When necessary, they supplement to keep hives alive while the bees are unable to forage. I have already discussed the varroa mite and the danger it poses to be colonies. But there are other predators to be concerned about. Honeybees are preyed on by:

Among them, hive beetles are often the most difficult to control. Hive beetles lay their eggs in honeycombs for the express purpose of providing a food source. Beetle larvae eat the comb, pollen, and honeybee larva. Once fully mature, adult hive beetles have no problem eating the eggs laid by queens.

Hive beetles and varroa mites are problematic even among managed be colonies. Less problematic are skunks and bears. By keeping bees in a controlled environment, they are less susceptible to predation by these other animals. Nonetheless, that does not stop a skunk or bear from wandering onto your property and bothering your hives.

Beekeeping experts can offer all sorts of tips for protecting honeybees from predators. The key is to be diligent. The best way to help honeybees in this regard is to never let your guard down. Look for hive beetles and mites. Be ever diligent about skunks, bears, and various hornet species.

Honeybees are prolific eaters. They need access to plenty of food to both feed larva and produce honey. Where does that food come from? Pollen and nectar. Both pollen and nectar come from vegetation.

It has been suggested that pollen is the only viable source of protein for honey bees. Furthermore, a typical bee has to consume between 3 and 4 mg of pollen daily to meet its protein requirements. As for pollen, it acts as a lipid source.

Beekeepers help in this regard by letting bees loose to pollinate farmers’ fields and wild areas. Likewise, migratory beekeeping is a fairly common practice that encourages honeybees to pollinate, among other things:

This is by no means an exhaustive list. Honeybees pollinate literally hundreds of different plants, trees, and shrubs. Next to birds, they are among the most prolific pollinators on the planet. Every time they go out to pollinate, they feed. And when they feed, honeybees produce the honey that feeds larva, nurse bees, drones, and the queen herself.

Earlier I mentioned preparing bees for overwintering. A big part of this is paying attention to honey harvests. It is never a good idea to completely remove all the honey from a hive. You leave about two thirds of it for the bees themselves. That honey is for larva and nurse bees during the warm weather months. It feeds the entire hive during the winter.

There are times when winter honey levels get critically low. Beekeepers can help by putting out trays of sugar water. This isn’t nutritionally optimal, but it’s often enough to help hives make it through winter food shortages. A hive could perish without the supplemental food.

Beekeepers also help bees by managing their populations. With all the talk of declining bee populations, you might not think that management is necessary. But it is. Honeybees are part of a delicate ecosystem that needs to remain in balance as much as possible.

Did you know that honeybees are just one of more than 16,000 recognized bee species? Moreover, most of us do not recognize any bee species beyond the honeybee and bumblebee. Yet those other species are all around us.

They all are interrelated in a delicate balance designed to keep them all thriving. If one species is allowed to get out of control in a particular area, other species could be harmed. That is one of the concerns of commercial beekeeping. 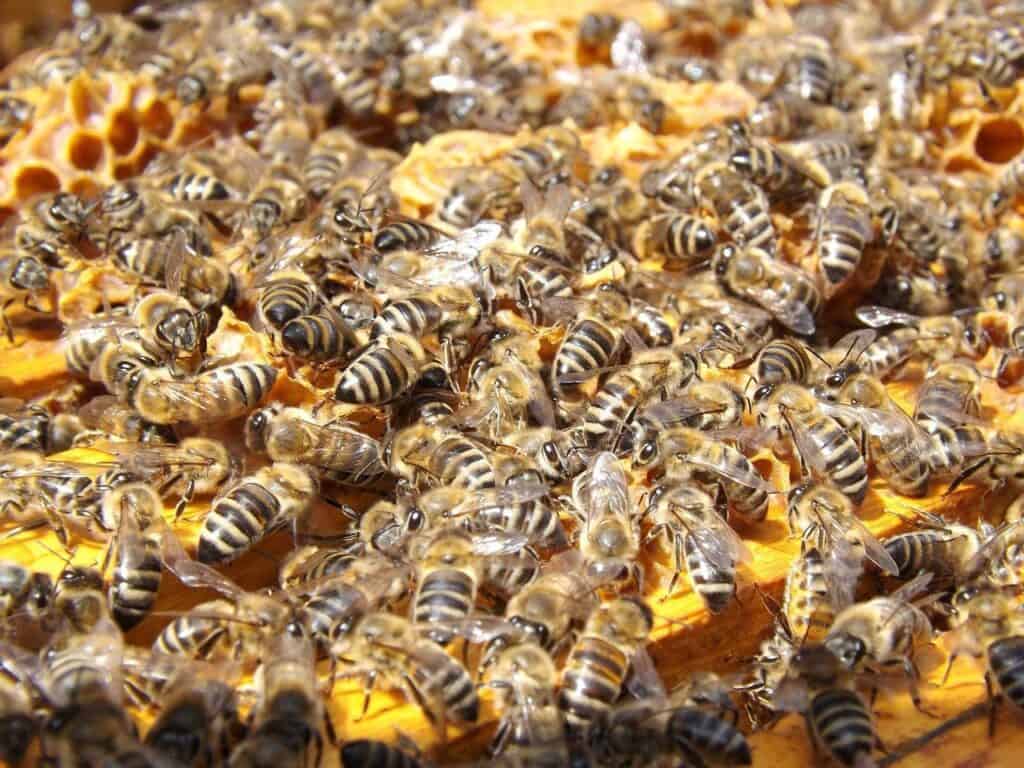 Multiple bee species share the same food sources in a given area. This suggests that if the population of one species is allowed to grow too large, it could dominate the food supply and negatively impact other species. The most experienced beekeepers understand this and do their best to manage populations accordingly.

It is also not a wise idea to allow honeybees to dominate other pollinators. Populations have to be kept in check so that there is enough pollen for every creature that needs it. By the way, one of the ancillary benefits of migratory beekeeping is managing food sources more effectively.

It is true that bee populations have steadily fallen over the years. There are plenty of reasons for this including pesticide use, lack of food, and the prevalence of parasites and disease. Beekeepers play a key role in maintaining healthy bee populations by multiplying hives. I’d like to close this post by discussing the potential environmental harm of keeping bees. Despite the fact that beekeeping has been around for hundreds of years, there are those in the scientific community who insist that the practice does more harm than good.

Most of their assertions are based on the fact that managed honeybees appear to have an unfair advantage over wild bee populations. There may be some validity to such arguments in areas where bee populations are not properly managed.

By and large however, beekeepers and their hives are not a big threat to other bee species. Beekeepers actually help bees by protecting them against predators, managing their health, providing access to plenty of food and managing their populations.